Darren Brady Nelson is an Austrian school economist who has mainly worked in Australia & the USA for TV shows, newspapers, think tanks, regulators, politicians, governments & NGOs. This recently includes an Australian Senator & American President. He is the chief economist at LibertyWorks, associate scholar with the Center for Freedom and Prosperity and policy advisor to the Heartland Institute. He blogs and posts at LinkedIn where he has built up a following of 26k in the last year.

Even those in the non-financial media have noticed the skyrocketing price of gold this year. Some partially identify, but don’t quite understand, some of the many (and more measurable) intermediary effects in the chain of causation such as a “weakened US dollar” and... 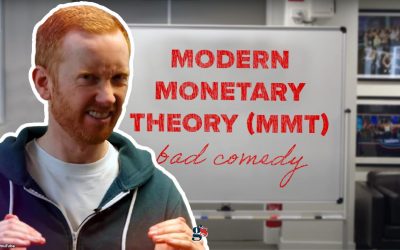 “Aunty” gave Modern Monetary Theory (MMT) the 'comedy treatment' on July 22nd in episode 13 of The Weekly with Charlie Pickering. Well, more treatment than comedy. The ‘treatment’ was to try to showcase, as per standard practice for the ABC, how clever and correct...

“Black Lives Matter” – in their own words

This year of 2020 has so far been the most unprecedented year in my living memory, going back to the mid-1970s. The two things that stand out the most have been the media, corporate and government embrace of coronavirus-inspired tyranny and Black Lives Matter or...

Darren Brady Nelson is an Austrian school economist who is the chief economist at LibertyWorks, associate scholar with the Center for Freedom and Prosperity and policy advisor to the Heartland Institute.

Darren has worked in Australia, NZ, the UK and USA as an economist (since 1994) and commentator (since 2009). The latter includes for conservative and libertarian newspapers, podcasts, radio, social media, think tanks and TV.

More recently he has advised Australian and American federal politicians on economic and cultural policies as well as authored and published a book entitled the Ten Principles of Regulation & Reform (2017).

Darren blogs and posts at LinkedIn where he built up a following of 26 to 26,000 in one year.