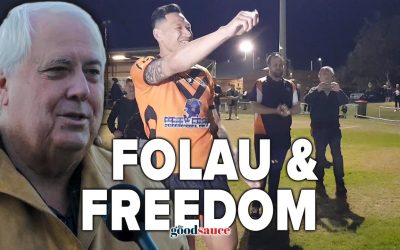 #NSFBT: Not Safe For Big Tech! This video contains clips that would almost certainly be censored by big brother and you won't see on Facebook or Twitter. You can enjoy more Good Sauce articles and shows by subscribing to the Good Sauce podcast on Apple, Google,... Israel Folau has been signed to play rugby league again with the Southport Tigers in the Gold Coast A Grade competition. Clive Palmer is the club's major sponsor and is personally sponsoring Folau's return for the rest of this year's football season. In a press... Why the NRL should let Izzy Folau play football

THERE are many reasons you might not like Israel Folau. If you're a "progressive" unbeliever, you might be offended by him quoting Scripture listing homosexual behaviour as one of many sins condemning unbelievers to a place you don't believe in called hell. If you're... I can’t wait for the NRL season to begin so I can watch my favourite opinions run out on the field.Nothing is more exciting than seeing approved views, adorned in my team’s colours, parade around a football stadium for 80 minutes.I don’t care if we win or lose, as...

Disney, Communists, and the Self-Destruction of Woke Capitalism

Woke capitalism, like the #MeToo movement before it, is in self-destruct mode. You may recall that last year, Disney threatened to boycott Georgia if the state passed a pro-life “heartbeat bill”. Arguing that the slated legislation was an injustice to women’s...

Subscribe to The Good Sauce podcast on Apple, Google, Spotify, SoundCloud or Player FM.You can help others find it by giving us a 5 star rating and review on Apple Podcasts. It’s happening all over the Western world. Churches and are being burnt to the ground. Nantes...

Israel Folau is in the news again, and this time it’s for something he didn’t do. Over the weekend Folau was the only person—players and officials included—on the field to not take a knee in support of Black Lives Matter. To his credit, the coach of the Catalan...

Pirate Pete believes it is wrong for someone to publicly disagree with his beliefs about marriage; that to do so is not an exercise in honesty or civility, but evidence of hateful prejudice and bigoted phobia. Hmmm.

Are there two brands of Christianity? Is the One True God Who Christians worship a God of love and forgiveness, or a God of judgement and justice? Israel Folau defended his faith in an interview with Alan Jones last night, said he hopes for an apology and admission Rugby Australia were wrong, and claimed he was offered money to take down ‘that’ post.

Health insurance provider HCF has weighed into the sins of the Folaus. Their spokesman said, “We do not support Maria Folau’s stance on this matter. There is no place in our society for discrimination of any kind.”

Israel Folau has accepted an offer from the Australian Christian Lobby and replaced the campaign to crowdfund his fight against religious persecution in the workplace.

First they feed you to the lions, then they tie one arm behind your back

GoFundMe has told over 10,000 users that they will get refunds instead of being allowed to support Israel Folau’s fight for freedom of religion.

In a nation that worships our sport and our sporting elites, Liz Ellis is a beloved Australian sporting hero. Liz played 122 netball games representing Australia, four years of which were as captain. Her personality displayed in the media is down to earth,...

The Message of Israel Folau, Notre Dame and Good Friday