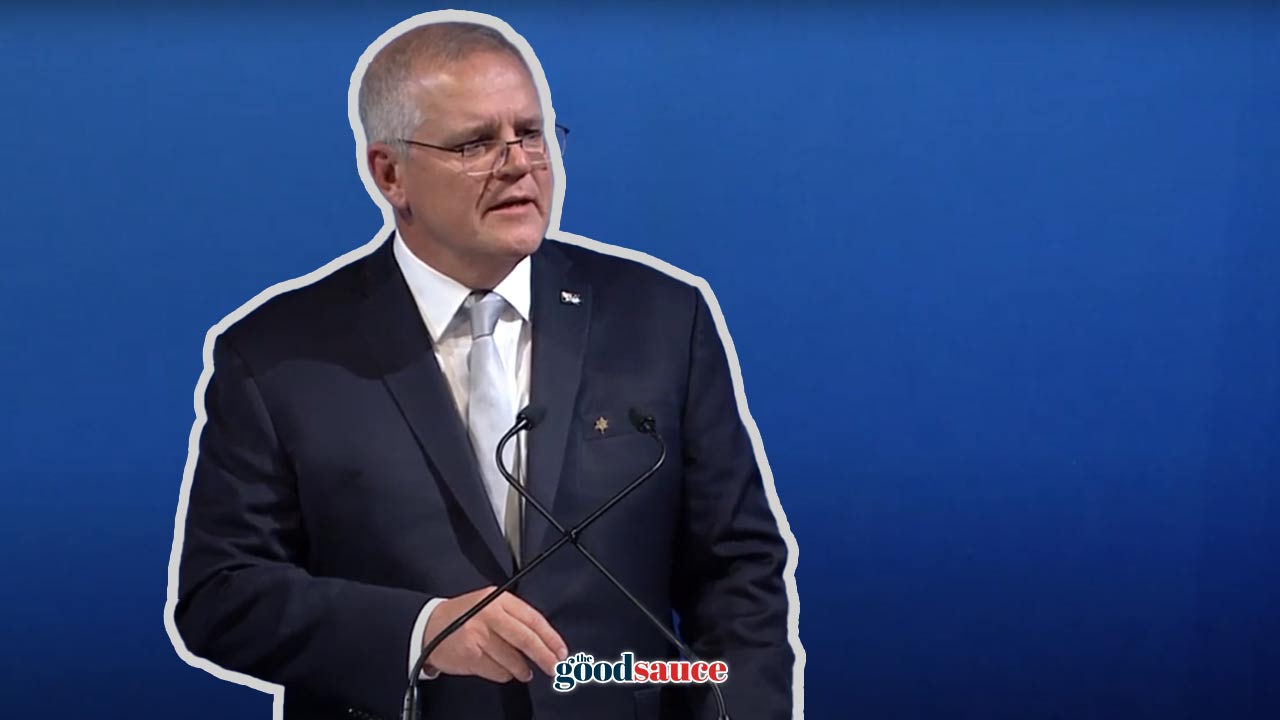 Last Thursday night at the United Israel Appeal dinner in Sydney, Scott Morrison gave the most important speech of any Australian Prime Minister in the post war era.

I know that’s a big claim. But given the seriousness of the ideological sickness afflicting our nation and the West, I think it can be substantiated.

While the Chinese Communist Party menace is a clear and present external danger, our cultural decline, if not arrested, threatens to bring us down from within.

Morrison struck deep at the heart of our illness.

He correctly diagnosed the cancer as entitlement mentality, identity politics and cancel culture.

The resultant social and moral corrosion was aided and abetted by the misuse of social media, something he rightly described in another context as the work of the evil one.

But Morrison didn’t just dwell on the problem. He gave us some golden keys, reminding us of the timeless but now unfashionable Truth that morality is the indispensable ingredient of free and democratic societies.

For decades morality has been a dirty word but it simply means the difference between what is right, and what is wrong.

Now that can of course be up for debate and should be in a free society. But the idea of morality simply cannot be scrapped.

Morrison reminded us of another timeless Truth which he said was the foundation of morality. That is a concept which in turn is at the heart of the Judeo-Christian tradition – human dignity.

“If you see the dignity and worth of another person, another human being, the beating heart in front of you, you’re less likely to disrespect them, insult or show contempt or hatred for them, or seek to cancel them, as is becoming the fashion these days.”

Challenging words for all of us who are engaged on social media.

Quoting the Psalms, Morrison said we are to see “people who are fearfully and wonderfully made”.

In an age where totalitarian impulses are coming to the fore and restricting freedoms, even in Western countries, Morrison said human dignity was the essence of morality and that this restrains government.

“Liberty cannot be established without morality and, nor morality without faith.”

Again, a hard truth for cultural elites who reject the Almighty and His Truth claims.

But post modernism with its you have your truth and I’ll have mine philosophy has proven a recipe for chaos. We can’t all be right at the same time.

Thursday night’s audience was Jewish so it was apt that Morrison’s speech was based on his reading of the late British Jew, Lord Jonathan Sacks.

Sacks draws on the Jewish idea of covenant as the way to bring free individuals together in the bonds of trust to make up community.

Human dignity drives the right treatment of our neighbours forming a morality which underpins liberty which in turn makes community possible.

As Morrison warned, today’s danger is an expectation that the state will take care of everything.

“As citizens, we cannot allow what we think we are entitled to, to become more important than what we are responsible for as citizens.”

This of course went to our responsibility as individuals to build marriages, family, associations of clubs and community groups and faith networks.

“These are the further building blocks of community on that individual, providing the stability and sinews of society that bind us one to another.”

In contrast, Morrison repudiated identity politics which is divisive and sadly drives so much of the public discourse.

“You are more, we are more, individually, more than the things others try and identify us by, you by, in this age of identity politics.

Morrison didn’t deny the kernel of Truth that so often exists in deceptive ideologies and offered this important qualifier.

“All of these of course contribute to who we may be and the incredible diversity of our society.

“But of themselves they are not the essence of our humanity.”

The ramifications of this speech are far-reaching. Its thesis, based on the timeless virtues which gave us our freedom and made us great, flies counter to the current cultural narrative coming from our universities, the ABC and those driving our education curriculum.

It was ironic that on the same day Morrison delivered this speech the Australian Curriculum Assessment and Reporting Authority recommended junking our Christian heritage and ancient Greek and Roman history from classrooms in favour of more anti-British “invasion day” tellings of our past.

Morrison’s speech is a signal to the cultural Marxists that their Long March is to be reversed.

As the ACARA recommendation shows, our cultural institutions are well and truly colonised by identity politics. They are populated by elites who believe it is their duty to ruthlessly cancel fellow citizens with “wrong think” and indoctrinate children.

But if the things Morrison has learned from Lord Sacks and the Christian Bible are true, the future of a free, prosperous and harmonious Australia depends upon turning the tide.

This has been Morrison’s finest hour as PM. He has laid down some clear markers.

For a politician who is known more for his pragmatism, this is a welcome and necessary shift.

It’s up to all of us to now have his back because the radical Left will resist vigorously.