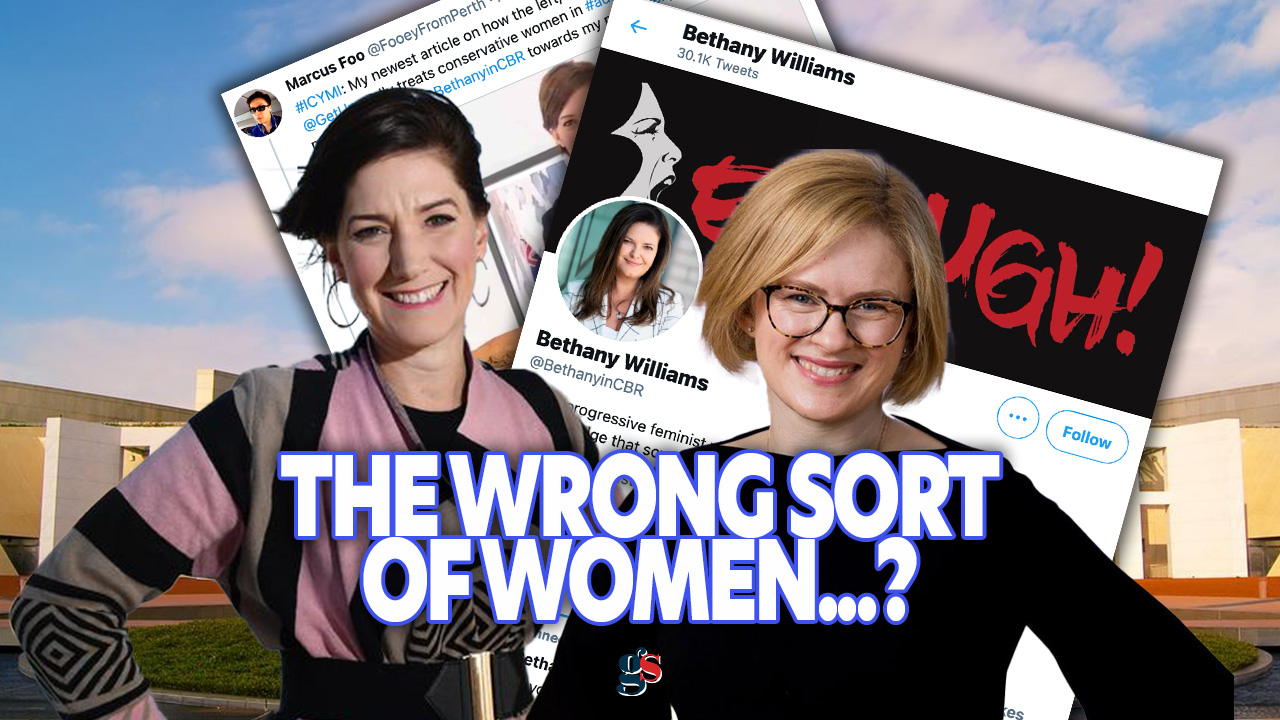 Recent discourse in the Australian political scene has focused squarely on the treatment of women in Parliament, and more widely in the Australian political landscape. With the advent of allegations being made by several women in Parliament, the Liberal Party have been in the spotlight more than their political rivals, but that does not excuse the Labor Party from this very serious issue. They have had allegations made against them that they refuse to address, Anthony Albanese preferring to turn this into a political game. But this is no matter to be used for political point scoring. This is serious. And if the recent outburst by the feminist Twitter brigade is anything to go by, this issue goes further than just Parliament House.

On Sunday, a young Conservative writer by the name of Marcus Foo published a well-researched piece on his blog entitled Yes It’s True…Female Conservatives are Being Treated Terribly in Australian Politics. The piece looked at the Left’s treatment of Conservative politicians like outgoing member for Boothby Nicolle Flint, whose premature retirement from politics comes as a result of the abhorrent tactics used by organisations including GetUp and the unions, in addition to Labor supporters, throughout the duration of the 2019 Election campaign. She was subject to harassment, bullying, and even stalking. Flint has worked tirelessly since as an advocate for women, particularly those in public life, speaking out against blatant sexism and abuse. Earlier this year she gave an impassioned speech in Parliament where she became tearful as she recounted the abuse she and other women have been subjected to over the last few years. Her retirement from politics at the next election will be a major loss for all Australians.

But Nicolle Flint is not the only Conservative MP to face egregious attacks. Last week, upon Scott Morrison’s announcement that Senator Amanda Stoker would become the Assistant Minister for Women, the Left pounced. Of note, Australian of the Year Grace Tame, presented with the award for her work as an advocate for survivors of sexual assault (and rightly so), slammed Morrison’s appointment of Stoker to the role, yet she seemed to only be getting one side of the story, failing to acknowledge Stoker’s work as a barrister representing women and children who are victims of sexual assault and exploitation. Magda Szubanski also launched an attack on the Senator, labelling her in a tweet “another of the small but noisy Christian soldiers faction hijacking the national agenda”. Stoker’s crime? Being a Conservative Christian.

Yet this goes further than just Conservative politicians. Many Conservative women in the media are also the victims of hateful rhetoric and disgusting claims. Sky News hosts Rita Panahi and Peta Credlin are often targets of the Left for speaking truth to power. Panahi is often the subject of racial abuse, her attackers often resorting to calling her an Indian when she has made it clear she is from Iran. Credlin cops some of the worst vitriol, being labelled a plethora of unsavoury terms that should not be repeated anywhere. Conservative commentator Daisy Cousens also regularly finds herself in the crosshairs of so-called feminists who seem to enjoy denigrating her appearance, although she is quick to hit back and call out their hypocrisy. Even The Good Sauce’s own Alexandra Marshall has faced the avalanche of hate from these keyboard warriors, who have in recent times attacked her for letting her readers know they can donate to her through Ko-Fi to help her continue the good work she does.

On Monday night, Foo’s piece on this issue began to take off, attracting the attention of one of the individuals it called out. Bethany Williams, formerly of the Australian Progressive Party, now a member of Labor, and aspiring political candidate, responded to the piece in a thread which ultimately did nothing but prove Foo’s point. Williams was called out for her degrading tweets made in 2020 implying through innuendo and suggestive comments that Marshall was taking people’s money for more than just her writing, tweeting “the men who are giving you money might want something more than your comments”. This came after Marshall had tweeted a link to a set of statements by International Panel on Climate Change (IPCC) experts against the IPCC, quoting one of them word for word. Williams, a climate change enthusiast, falsely attributed the quote to Marshall, then ventured on a series of relentless and vile attacks on Marshall and her readers, all because she embarrassed herself and this was clearly her coping mechanism.

In Monday night’s Twitter storm, Williams claimed Marshall’s writing merely consisted of her tweets and nothing else. What she failed to mention was that Marshall has written countless pieces for The Spectator Australia, The Good Sauce, Penthouse, and Caldron Pool. What is important to note is that there is no money in Conservative writing as compared to the enormous machine of the Left. In a thread responding to Foo’s piece, Williams labelled Marshall, Cousens, Flint and Miranda Devine “Crumb Maidens” that “scramble to get the crumbs that the patriarchy give them”. Ironically, she followed this by saying “These women throw all other women under the bus in order to maintain the favour with these men.” The irony in this is that modern feminists often throw women who do not toe their ideological line under the bus, as Williams has done herself.

The backlash from Bethany Williams and so-called feminist to Foo’s piece highlights a significant issue in the current political climate. Modern feminism is a far cry from its roots in equal rights for women. It has morphed into a gargantuan monstrosity of hate and vitriol, tearing apart the very fabric of what used to be the home of liberation. The Left talk a big game about supporting and promoting women, especially in Parliament, but immediately attack and degrade those same women if they are Conservative.

One thing is clear: The Left, and moreover modern feminists, have a problem with Conservative women. Maybe this is because of their differing views. Or maybe, just maybe, it is because Conservative women actually care about other women and are not merely using them as political pawns in an ideological grift.