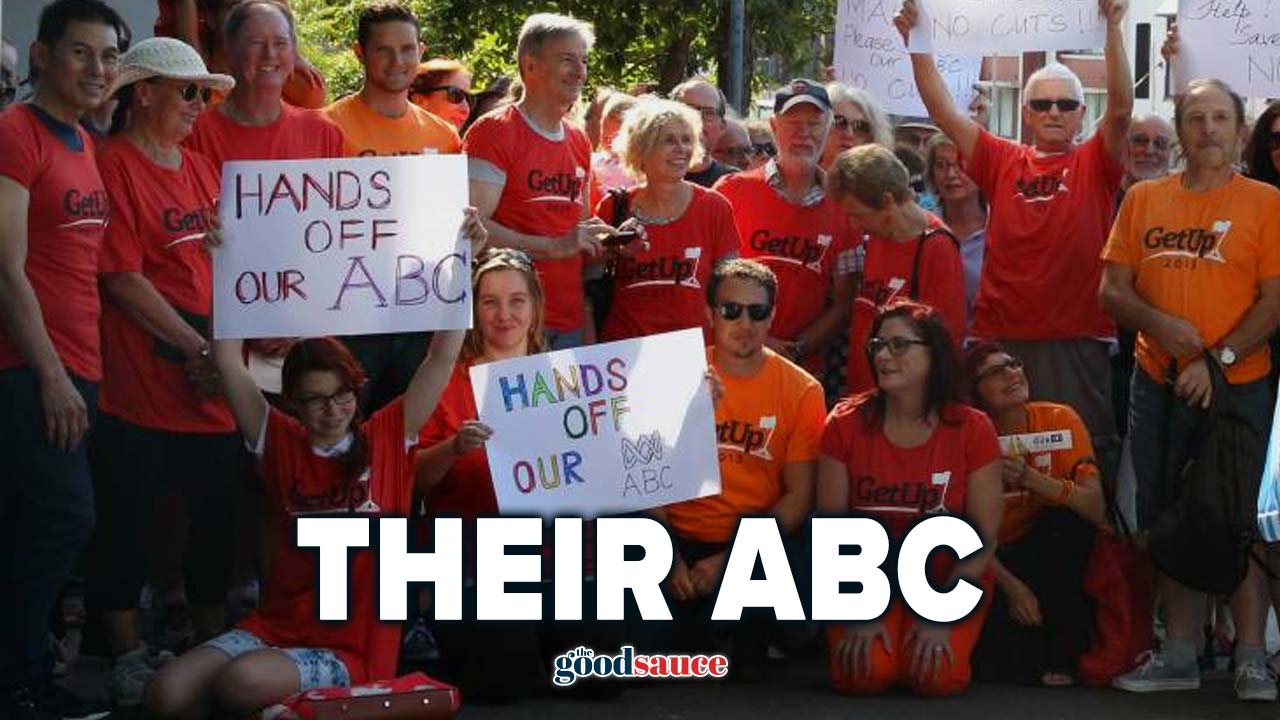 The ABC is a greatly loved, essential media service. The ABC would immediately collapse into oblivion if it went behind a pay wall. These two things cannot be true at the same time…

There has always been a general political divide in most Western nations that sits around fifty-fifty, veering left or right depending on the tone of the era. As a government-funded entity bound by law to be politically impartial, the Australian Broadcasting Corporation (ABC) is meant to use public money to provide a service for all.

Those who love the ABC claim that of course it presents a balanced opinion, while the rest who think it is a waste of money feel physically sick when they are assaulted by clips of its shows left carelessly floating around the internet. This is an easy question to resolve. If half the public hate it, and half the public love it – the ABC is a political platform.

#DefundTheABC has been trending for some time because the half of the population who hate the ABC are sick of funding a political propaganda arm of Labor and the Greens. Considering how tightly controlled election budgets are, it seems unreasonable that a proper democracy would allow its publicly-funded broadcaster to swing a sledge hammer through the free press to protect its favourite MPs.

If this behaviour wasn’t bad enough, the ABC — with a bit of help from disgraced ex-prime ministers Kevin Rudd and Malcolm Turnbull — has done its best to outright ban their biggest free market competitor, Murdoch. The idea that a huge amount of Australians are choosing to buy their news from Murdoch’s various publications upsets political egos, especially when mean things are printed about them.

A truly free press is one that answers to its market — the Australian people — rather than the flock of media who rely on the graces of the malignant bureaucracy that holds the government’s purse strings. The ABC knows full well that its quality has become a laughable mess over the last fifty years and if it ever had to rely on the public to voluntarily pay for its ‘essential service’ most of its orchestra of mediocre talent would end up in the trash.

The ABC watched this happen to its British counterpart, the BBC, a few years ago when the license fee was made optional. Instead of a government credit card, the BBC budget is overwhelmingly drawn from the (previously compulsory) license fee on anyone who owns a TV. Millions have already cancelled the service while the real terror for the BBC is that most of Gen Y and Gen Z do not own TVs at all.

This situation wasn’t helped when BBC executives went out of their way to kill off their highest rated, internationally marketed shows which actually earned them a bit of pocket money. With the loss of Top Gear and the woke-ification of Doctor Who, the broadcaster is bleeding. It is unlikely that the ABC will screw up as badly, but only because they do not have any quality, mass marketed shows to begin with.

ABC drama involves families screaming and crying in an endless saga of painful viewing, the ‘comedy’ features hosts attempting to sh*t on the set, and the news – if you can call it that – is hosted by figures of such intensely dislikable character that you’ll think time has literally frozen in disgust. 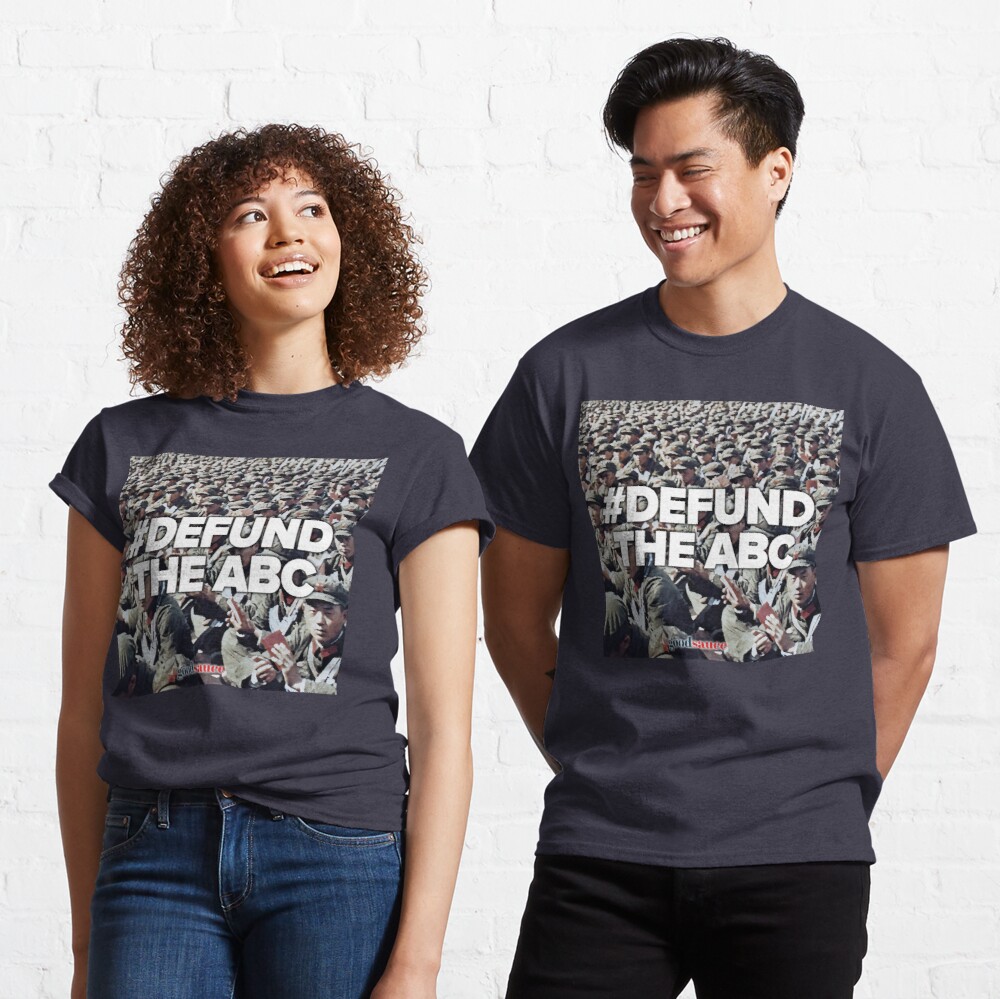 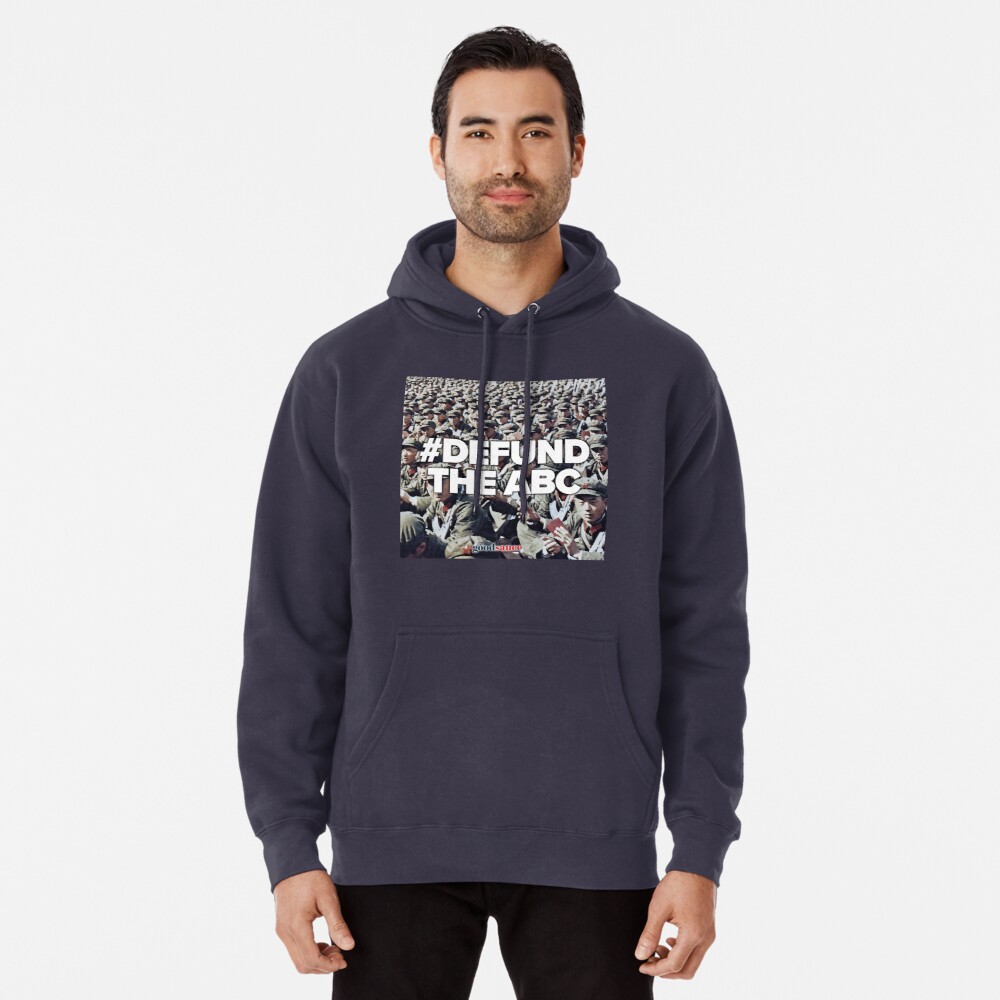 Love the message? Support common sense and spread the word: #DefundTheABC! Grab the mug or apparel and start a conversation with friends or colleagues. CLICK HERE to browse.

Anyone who has survived Paul Barry’s excruciating fifteen minutes of ‘I am so jealous of Murdoch it is physically shrinking my balls’ MediaWatch is rewarded with an hour of QandA which appears to exist solely to give Twitter something to complain about. Sunday morning isn’t much better with Sky News Australia hostage David Speers presiding over a set that looks as though it has been coughed up out of a beige Volvo. Arguably, the best thing it has going for it is the children’s cartoon called Bluey.

Even journalists at the ABC have been getting nervous about the legacy of Four Corners, which seems to be going out of its way to nail its biased colours to the mast.

The ‘revelation’ that Prime Minister Scott Morrison is friends with a Qanon follower is — not news. It might be news if these were his beliefs, but it has been exhaustively proved that this is not the case. This didn’t stop Four Corners producing a hit piece on Morrison.

“They’re embarrassing the whole organisation,” said one of their prominent presenters.

Their concern is that Four Corners has become activism rather than journalism. Not that it matters to the wider public, who aren’t watching. To them, the whole network is ‘activism’. While the ABC panics that the Four Corners non-story might constitute an overreach, they needn’t because Four Corners hasn’t produced anything remotely resembling journalistic savagery for the entire lifespan of a Millennial.

What Four Corners is really saying with their Qanon piece is that people should only have friends and relations with beliefs that exactly mirror the state-approved standard. It is an expansion of the ‘guilt by association’ mantra circulating Cancel Culture and fueling the trend within publicly-funded universities to deplatform speakers. The few remaining journalists at the ABC know that it is this idea that is going to get them into trouble with the public, not the irrelevant accusations poorly hurled at Morrison.

“I would think that someone in a position like Prime Minister Morrison would want to condemn those views and indicate strongly to the public that they have no bearing on his official actions, on his responsibilities, nor on his world view.”

To entertain a statement like that, the onus is on Four Corners to present evidence — any evidence — that Morrison is influenced by Qanon. They can’t, so instead the fifty minute show drags out about three seconds of content with melodramatic voice overs and a theme song that used to mean something to the Australian public. After the horror of watching Australia’s civil, human, and constitutional rights demolished, most Australians are far more worried about the influence that the World Economic Forum, the European Union, and the United Nations appears to have on Morrison.

In previous decades, the ratings war for the ABC was waged with their free to air commercial competitors, but in this era it is the streaming services and subscription platforms who are forking out for quality original content available on demand. While ABC has the edge on TV (because it’s ‘free’), Sky News Australia is dominating the digital space and gaining international attention. The ABC know full well that the only reason they still exist as a media concept is the protection that guaranteed public money affords them — money that comes with strings which have all been cut off.

Back in the day when the ABC and its predecessors were hatched, it cost a fortune to produce radio, TV, and print publications. It made sense for the government to ensure that the public had access to at least a basic level of news information, particularly considering there were a couple of world wars going on.

Today? Not so much. We live in the age of media frenzy where kids producing content in their parents’ basement have online audience figures so large that mainstream media companies can’t bring themselves to compete on social media platforms.

Far from ‘essential’ the ABC has become dangerous to the future of the free press.