Do you really want to stop black deaths in custody? 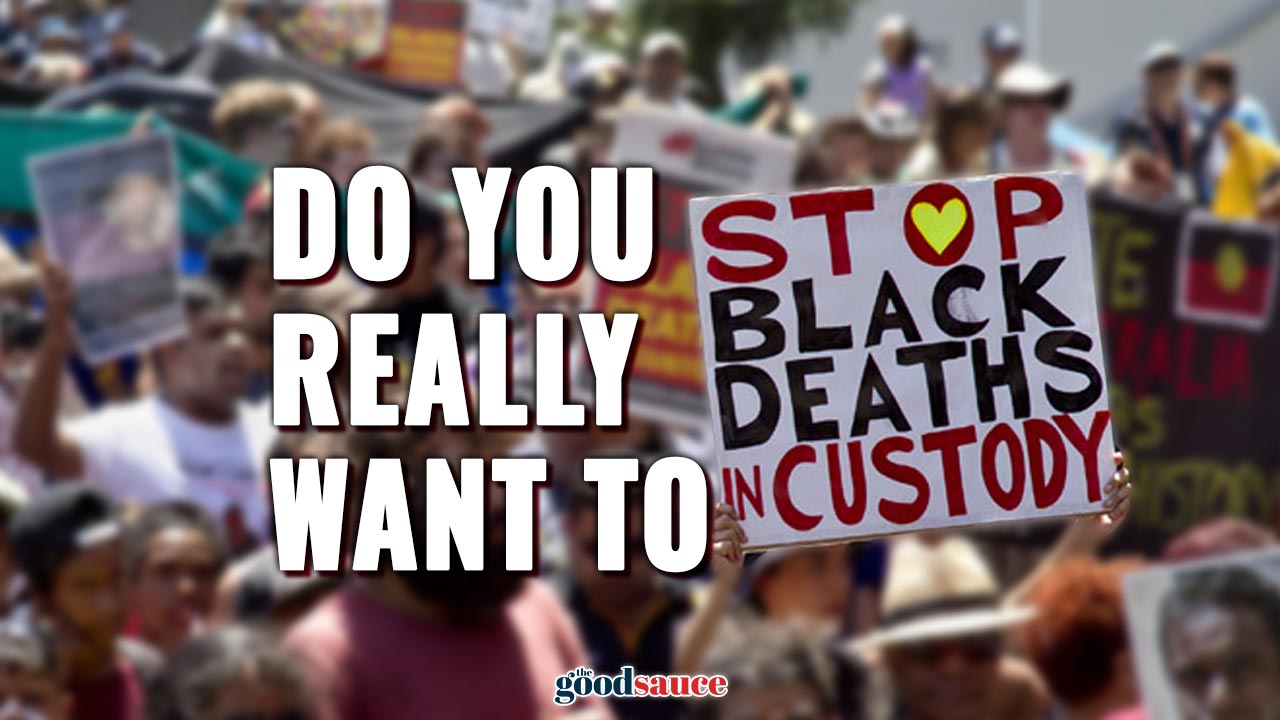 The Good Sauce · Do You Really Want To Stop Black Deaths In Custody?

How horrific it must be to have a loved family member be arrested for a serious criminal offence, to be found guilty and sentenced to time in jail. That would rock my extended family, and yet none of us would condemn that person or cut them off. We would continue to love them unconditionally while wanting better behaviour decisions from them in the future.

How much worse it would be for that loved family member to then die while in custody of the state, however that happened? It would be heart-wrenching. I’m sure I can’t begin to imagine how much so.

Collectively, the Lying Harlot Media like to trumpet the number of black deaths in custody:

“More than 450 Aboriginal and Torres Strait Islander people have died in custody since the release of the 1991 landmark royal commission report.”

Their cue is for outrage, indignation, anger and grief for our collective guilt of obvious “systemic racism”.

And that’s the lie.

The grievance industry includes the media, political & activist leftists (but I repeat myself). They perpetuate the myth that these statistics are “shameful”, manipulating the emotions of their trusting audience, and omitting highly relevant facts in the interest of accumulating public support for their quest for power.

Apparently there is almost never any question of injustice of a non-Indigenous person’s death in custody.

The article describes the latest Indigenous death in custody was of a person undergoing a medical procedure in Fiona Stanley Hospital (“Western Australia’s flagship health facility”) and being placed in intensive care before his passing. Although there is no reported suggestion of police brutality, neglect or other injustice, his tragic death is now included in the tally of all black deaths in custody and politically useful to the grievance industry.

Apparently there is almost never any doubt of the injustice of a person’s death in custody if the deceased was Indigenous.

But here is the objective data the grievance industry doesn’t want you to know lest they struggle for relevance in a civilised, maturing nation which really doesn’t need them quite as much as they’d have us believe. 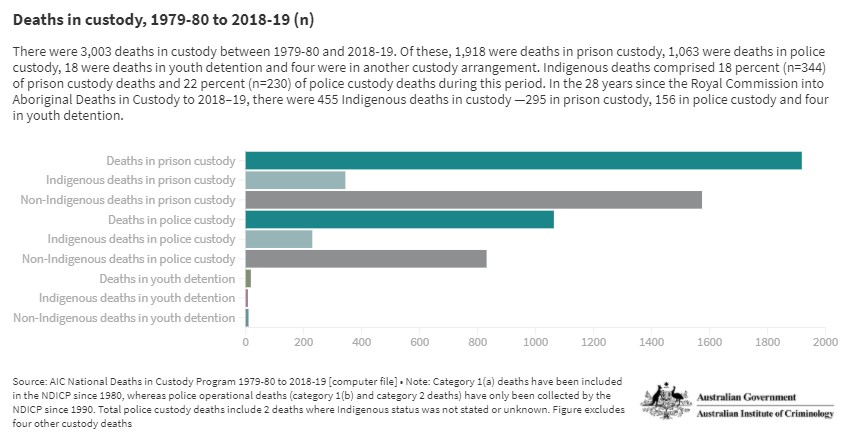 The obvious diagnosis – to anyone oblivious to false claims of racism by ideological enemies – is that there is a cultural problem which results in disproportionate representation of Indigenous people in serious criminal offences, and subsequently custody. 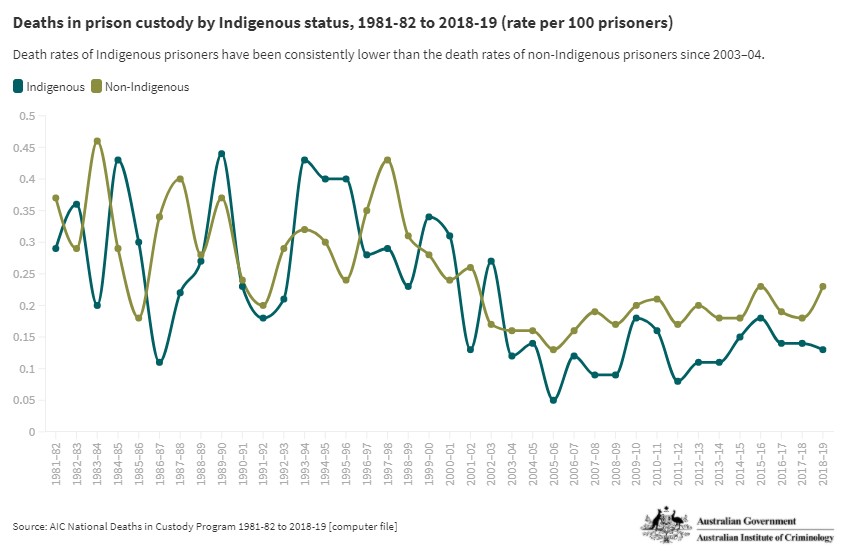 Forty years of records maintained by the Australian Institute of Criminology’s (AIC) National Deaths in Custody Program (NDICP) reveals an encouraging and constant downward trend from the ’80s and now constantly showing better outcomes for Indigenous people in custody.

Additional perspective useful to this discussion is that there are well over 40,000 prisoners in Australia (as of 30 June 2018). If you took any Australian city with a population of 40,000 and expected zero deaths every year you would be called irrational and unreasonable. If that population was 92% male and 28% Indigenous, you would also reasonably expect its tragic annual deaths to be similarly demographically representative.

Of course, a population of 40,000 people suspected or convicted of criminal behaviour would be reasonably expected to have a higher rate of physical and mental health problems, substance abuse and violent tendencies, and therefore a higher rate of death per annum than the average Australian city of the same size.

If we follow the grievance industry logic, we should be outraged that 1,843 men have died in prison custody since 1979 compared to only 75 women. That’s 96% of deaths in prison – surely conclusive evidence that Australia is a systemically misandrist feminarchy! We demand equality, now!

Or is it to be expected because of the population composition, a direct result of the poor behaviour choices of those individuals in custody?

Distractions with the (lower than average) deaths in custody are missing the forest for the trees. Every death is tragic. Every life matters. The problem isn’t there.

What the outraged blacktivists don’t want you to know is there’s not even any credible evidence of systemic racism in either the police force, prison system or legal system.

The Royal Commission into Aboriginal Deaths in Custody (RCIADIC) (1987–1991) failed to ask why so many Aboriginals wound up in police or prison custody. But the criminologist who headed up the criminology research group of the royal commission said in 1991:

“One of the myths surrounding this subject is the belief that most Aboriginal prisoners are incarcerated for minor offences such as public drunkenness or traffic offences. There probably was some basis for that belief many years ago, but it is certainly not the case today. A glance at the relevant data from the Australian Bureau of Statistics shows there is very little difference between the severity of the offences committed by indigenous and non-indigenous prisoners. The hard fact is that most of the indigenous prisoners in jail have committed serious offences that would have had the same result if they were not indigenous.

Another fact that will not be welcomed is some research has suggested indigenous offenders may be given lesser sentences than others. Certainly, at an anecdotal level, several individual judges and magistrates will admit in private conversations that they look for a “discount” in the sentences they impose on indigenous offenders. More research is needed on this sensitive issue.“

It’s time for some truth talk.

The problem is endemic, not systemic. There’s an ancient cultural problem in Indigenous communities and innocent people there are the real victims we should be most concerned and vocal about. Only when we take their tragic plight seriously and apply equal expectations of non-violence and respect for women and children will we have a chance of reducing Indigenous over-representation in custody.

Leftists are incapable of treating Indigenous people like a mature culture, preferring to infantilise them by relieving them of any responsibility. Such paternalism is insulting, and the real racism. They will patronisingly offer the excuse of white settlement as if pre-colonial Australia was a tranquil paradise of noble respect for women and children, and inter-tribal warfare was unheard of.

“Sutton … contends that archaeological records and ethnographies by trained anthropologists leave little doubt that family and community violence were widespread and frequent in Australia under ‘traditional’ conditions (Sutton 2001, p. 152). He cites archeaological evidence indicating that prehistoric (Aboriginal) remains reveal a much higher incidence of ‘defensive’ injuries to the bones of Aboriginal women than to the bones of Aboriginal men.”

The inconvenient truth for the nasty opportunists who jumped on board the imported Black Lives Matter Corporation protests in Australia is that Indigenous violent offenders can’t blame whites for their criminal choices. Happily, if arrested, they have better chances than whites of living to make better choices.

It is certain there is no easy solution for the disproportionate custody rate experienced by Indigenous Australians.

I am equally certain the irrational claims of systemic racism are politically helpful only to elites in media, politics and the rest of the grievance industry looking for tax-payer money to burn on enflaming racial divisions in the name of justice and reconciliation.

Let’s have enough respect for our fellow Australians to be honest about the real causes to real problems and from there we can collaborate to find real solutions.

There is no evidence of systemic racism.