FACT CHECK: Is Australia Day a celebration of the 1948 Nationality and Citizenship Act? 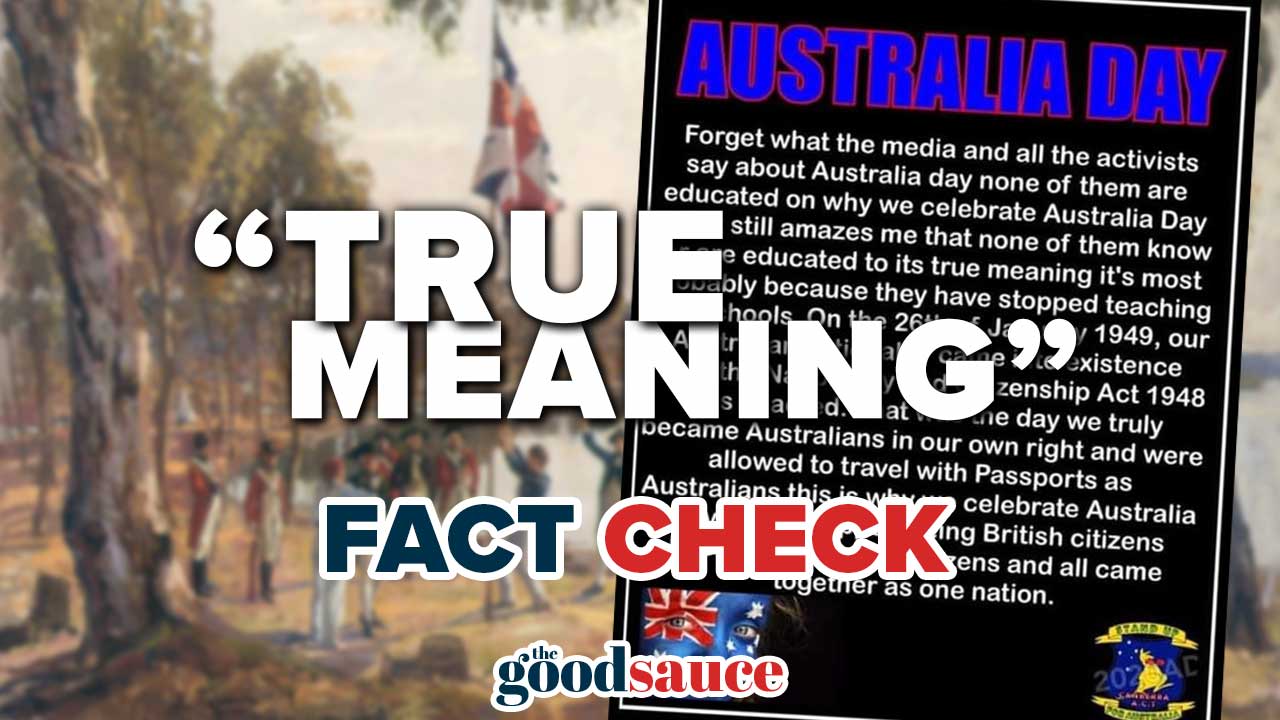 There’s a meme doing the rounds of social media which claims the “true meaning” of Australia Day and the reason we celebrate are no longer known by “media and all the activists”, “probably because they have stopped teaching it in schools.”

On the 26th of January 1949, our Australian nationality came into existence when the Nationality and Citizenship Act 1948 was enacted.

That was the day we truly became Australians in our own right and were allowed to travel with passports as Australians.

This is why we celebrate Australia Day, as we stopped being British citizens, became Australian citizens, and all came together as one nation. If motives can be inferred, it seems this meme is being shared to counter the incindiary claims of fringe activists and the Lying Harlot media. They attempt to make the popularly understood meaning of Australia Day – the arrival of the First Fleet in Sydney Cove on 26 January 1788 – into a day which divides Australians instead of one which unites us in patriotic pride.

Motives do not make factual errors accurate, or vice versa. The truth is nothing to shrink back from.

The Nationality and Citizenship Act 1948 did come into effect as the meme says, on 26 January 1949. The text of the legislation says:

“This Act shall come into operation on a date to be fixed by Proclamation”.

My suspicion when researching this meme was that the government chose that date because it was Australia Day, a long established day of celebrating Australia. It disheartens me more right thinking people didn’t also suspect the cart was before the horse and the meme perhaps mistaken, before sharing it as if true. Social media has dulled our wits, helping our counterparts not take our good arguments seriously.

So having read the legislation which makes no mention of Australia Day I searched for the Proclamation, and found this in the Hansard record:

When this bill becomes an act, it will be proclaimed on Australia Day, the 26th of January, 1949…

That is from a speech by Arthur Calwell MP, then Labor Member for Melbourne and Immigration Minister. He clearly refers to the date as “Australia Day” in advance and assumes everyone knew it as such already.

Further, it is easily established the significance of the date, by any name, was celebrated soon after settlement, and it did not first receive significance because of the Proclamation of the 1948 Act.

As early as 1804, almanacs, calendars and the Sydney Gazette began referring to 26 January as First Landing Day or Foundation Day.

It was first acknowledged as a public holiday by Governor Macquarie in 1818, the year after he named the continent Australia on the recommendation of Captain Matthew Flinders who circumnavigated it.

In 1888, 100 years after the First Fleet’s arrival in Sydney Cove, “representatives from Tasmania, Victoria, Queensland, Western Australia, South Australia and New Zealand joined NSW leaders in Sydney to celebrate the Centenary. What had begun as a NSW anniversary was becoming an Australian one.” – AustraliaDay.org.au

The meme is actually profound in its many errors as it also misleadingly claims, “we stopped being British citizens.”

In those days citizens of other Commonwealth countries were recognised as British subjects, and this was also the express intention of Australia’s Nationality and Citizenship Act 1948.

This Act implemented a principle contained in the United Kingdom Nationality Act 1948 that people of self-governing countries within the British Commonwealth had a particular status as a citizen of their country as well as having the wider status of a British subject.

In the Immigration Minister’s speech, he put it this way:

Incorporated in the Australian flag is the Union Jack, and similarly in this bill there is complete recognition of our close ties with the United Kingdom and the other countries of the British Commonwealth. Provision is made for us, while identifying ourselves as Australian citizens, to remain British subjects…

My aim, and that of the Government, is to make the word “Australian” mean all that it truly stands for to every member of our community. We shall try to teach the children that they are fortunate to be British, and even more fortunate to be Australian.

It was only in 1984 that Australians ceased to be British subjects and we adopted our own national anthem.

This meme is an object lesson that just because you sympathise with a person or idea, it doesn’t make them right. It is something any right thinking person who wants to be taken seriously should delete from their timeline.

If someone is determined to hate Australia Day because white people arrived and behaved like everyone else in the world in that era – including on this isolated island – the date Australia is patriotically celebrated won’t change their loathing or lamenting of Australia’s existence one iota.

To right thinking people it will always and only be a celebration of Australia; our British heritage, our first inhabitants, our settlers and immigrants, our freedom, our democracy, our Christian values of justice, equality and dignity for all, and a promise of a future and flourishing for all who come to contribute.

We don’t need bad memes to make that argument.