Hey teachers, leave those kids alone. You are lying to them. 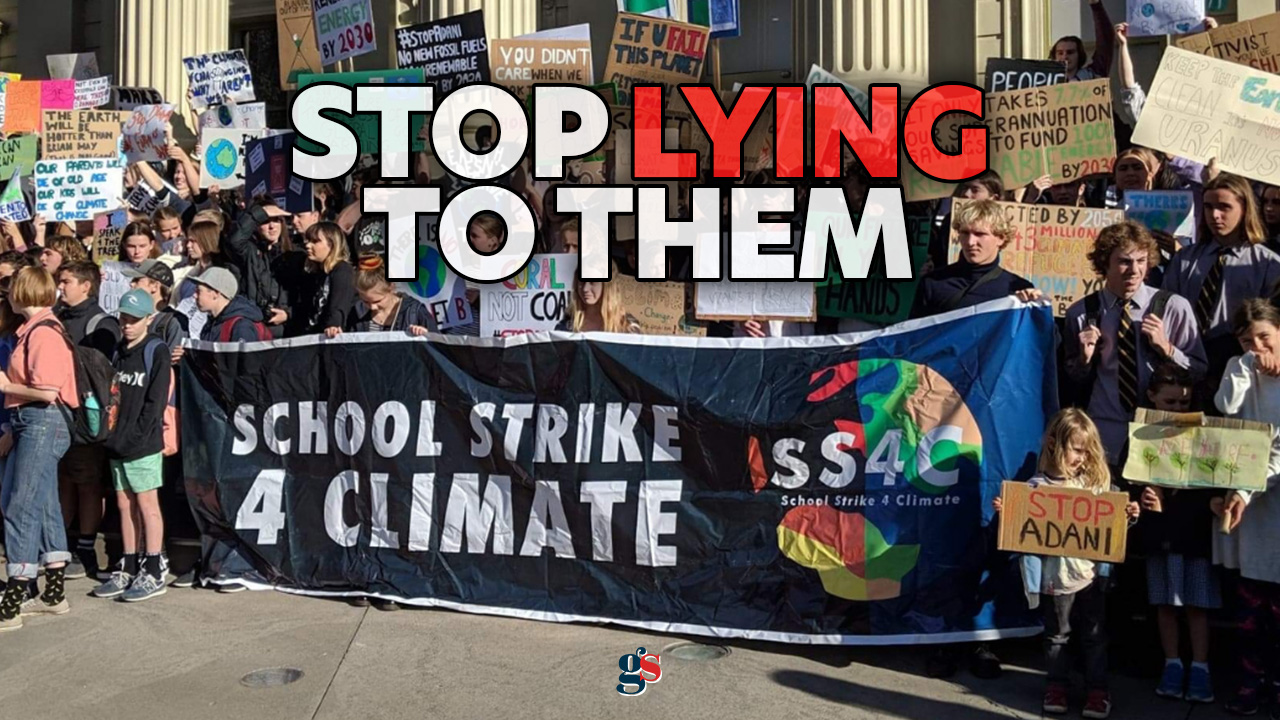 What their woke teachers, who have fed them lies about immanent climate collapse, failed to teach them is that government “climate action” has caused our electricity prices to more than double over the past decade.

This has caused economic hardship to millions of families, pensioners and businesses for no good reason.

Unlike New Zealand and Canada, Australia has met and beaten all of its emission reduction targets under international agreements.

What more action do the kids want?

If the kids on the streets really believed that coal was destroying the planet, they’d be outside the Chinese Communist Party’s embassy in Canberra bagging dictator Xi Jinping instead of demonising Scott Morrison.

But the truth has never mattered in this debate and a whole generation of children have been scared witless.

The climate strike kids are even opposed to Morrison’s plan to keep our lights on by building a gas-fired power station at Kurri Kurri in the Hunter Valley.

The kids can’t tell us how homes will be heated and cooled, manufacturing jobs will be sustained nor how electricity prices will remain affordable in their coal, gas and nuclear-free woke world.

They are completely unhinged from reality thanks to brainwashing at school and by the media.

The fruit of woke brainwashing is ripening in the minds of unripened brains.

“We are school student’s (sic) of all ages, races, genders, backgrounds and sexualities from every part of Australia,” their punctuation-challenged, LGBTIQA+-compliant website says.

But the hypocrisy of the climate cult extends way beyond the kids to the world of adults, who should at least know better.

The Nationals leader John Barilaro even boasts about his anti-coal and gas cabinet colleague, Matt Kean, being locked in “witness protection” until after the by-election.

This exposes the hypocrisy of politicians simply doing whatever it takes to get votes.

Like the kids, Kean thinks a modern industrial economy where households enjoy heating and air-conditioning and people have manufacturing jobs can be run on wind and solar.

Kean will continue, with Barilaro’s acquiescence, his program of degrading NSW’s energy security on Monday, once the by-election is over.

There is simply no need to be hobbling our economies and making families suffer economic pain in a futile attempt to change the temperature of the planet.

Make no mistake, NSW and the entire eastern seaboard of Australia faces an energy crisis when the Liddell coal-fired power station at Muswellbrook closes.

Morrison’s gas-fired power station at nearby Kurri Kurri is a last-minute attempt to stop the lights going out. Literally.

Only politicians could have orchestrated this crisis. Taxpayer-funded CCP-built windmills and solar panels combined with the wilful run-down of coal-fired electricity production has led to a situation where “the fix” is to build a gas-fired plant forty miles from the world’s biggest coal-export port.

It makes no sense.

But Kean and the kids hate gas too. Today’s protest is anti-coal and anti-gas.

Only weak politicians stand in the way of doing what should be done, and that is construction of a replacement coal generator.

The CCP must laugh as we export shiploads of coal to feed their insatiable appetite for coal-fired electricity with not a lump allowed to be burned here in a new station.

If Liberal and Labor really believed what they say about climate change, they would shut down coal exports tomorrow. No wonder the poor kids are confused.

Meanwhile the CCP winning its “unrestricted war” against Australia without firing a shot.

We weaken our economy and hurt our people, they strengthen their economy and military and give their people affordable electricity.

Our politicians have signed on to a really bad deal.

The CCP is aided in its mission by our woke-infested kids skipping school to yell on the streets that it is all Scott Morrison’s fault.

The dishonest Labor, Liberal and Greens politicians are Xi’s other useful idiots.

All the while, families, pensioners and businesses trying to pay electricity bills suffer.