Those four little words will cause a collapse of the social media environment if they are ever proved in an American court.

As a de facto public forum, Twitter exists on the Section 230 Immunity tightrope – an idea forged in the Internet’s infancy when no one was quite sure how to navigate the legal nightmare of an entity publishing real-time content on the behalf of millions of (mostly) anonymous users. Platforms are exempt from legal responsibility regarding their content, unlike publishers who are liable. In exchange for this protection, platforms are not allowed to interfere with the content or manipulate it for economic or political gain.

In light of Twitter’s recently released ‘Civic Integrity Policy’, I dare anyone to stand up and argue that Twitter is not deliberately interfering in US politics or the global discussion surrounding China’s Covid19.

Twitter is certainly not the first business model to profit from the idle chatter of the mob. There have always been forums and platforms brimming with people talking rubbish all day, ripe for data harvesting and marketing opportunities. Social media is exactly that – a swarm of people being social with no particular purpose – which pilot industries monetise. To suggest that this behaviour is the same thing as a media service is laughable. Twitter and its peers are nothing but live conversations formalised in print. Sometimes media companies utilise this service to promote their stories, but Twitter is more of a billboard than an editor.

Social media occupies the same space as traditional media and its subject matter often overlaps, making print media uncomfortable about being overshadowed by unconstrained noise. Instead of accepting that humans are incapable of separating their social lives from the news, someone from the Twitter executive with a god complex decided that they had a responsibility to direct the conversation. It was Twitter who unwisely muddied the waters regarding its publishing status by ‘fact-checking’ content and hiding people it didn’t like.

As a platform, they should have no opinion whatsoever on the content their users post, so long as it does not break Federal US law. That is what it means to be a platform. Instead, Twitter extended the ‘guilt by association’ dogma, claiming that user generated tweets reflected on the character of Twitter. As a self-declared champion of Marxist hashtags, it was embarrassing for them to see conservatives dominating their favourite toy. With Trump rising through the organic trends, Twitter set out to ban his tweets with a thousand unspecified infractions of unwritten rules, rather than being honest about old fashioned Maoist censorship.

The reality is that Twitter had no problem with robust (abusive) comments or the dissemination of inaccurate information while it was conservatives on the receiving end. When you have characters like Dick Costolo, Twitter’s ex CEO and a current Patreon board member, joking about shooting Capitalists in the revolution, it is clear that Twitter Safety has no interest in upholding a genuine moral standard. They are the maintainers of propaganda where community guidelines are used as a weapon against their political opposition.

We have to remember that these businessmen are the ones entrusted to be moral caretakers in charge of censoring ‘hateful’ content on platforms. In 2015, Costolo sent an internal Twitter memo about his desire to crack down on abuse which read, “We suck at dealing with abuse and trolls on the platform and we’ve sucked at it for years.” One wonders how he feels about his own threatening comments… Patreon, which he currently oversees, has also been repeatedly dragged through the press for blatantly censoring conservative creators. Notice a pattern?

The solution for the last couple of years has been to abuse the Good Samaritan clause, which gave the proviso that social media companies could make some editorial decisions related to inappropriate content so long as it was purely to uphold community safety standards. This is the reason Twitter’s reporting account is called ‘Twitter Safety’ and not ‘Twitter’s Cultural Revolution’. The Good Samaritan was written at a time when forums were trying to get rid of abusive trolls. They asked for a little bit of lenience to remove spam and objectionably vile content. This clause was never intended to give social media companies liberty to act as traditional publishers and control the political narrative of their users. That is interfering in an election, the very thing Twitter’s frightening new algorithms and Civic Integrity Policy is meant to prevent.

Users can always tell when the developers at Twitter are playing around with its algorithms. Odd things break. People disappear. The trending topic list starts posting random fragmented words or promoting awkwardly placed politicised news items. Tweets vanish off the main feed and large accounts get messages asking if they’ve gone on holiday…

In the last few weeks, thousands reported being shadowbanned without cause – silenced by a complex sequence of system quirks designed to suppress people no different than an editor hiding them at the bottom of the broadsheet.

This is all happening because Trump is set to win the US election and Silicon Valley is freaking out. They believe that controlling social media will change people’s minds at the ballot box, rather than infuriating the masses who can tell when their lives are being manipulated by out of touch billionaires.

Caught up in this power-crazed state, Twitter made a catastrophic error, giving Trump all he needs to nail them to the accusation that they are publishers. When that happens, Twitter will have two choices; admit to publishing behaviour and become legally responsible for all content (impossible), or relinquish it’s hold on the conversation – ending social media censorship forever. 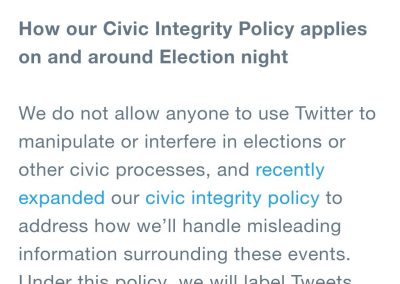